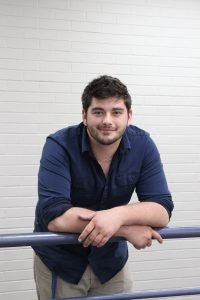 Austin is an energetic, outgoing application developer who is motivated by helping others succeed, a trait that every client appreciates. His interest in hearing others’ ideas along with his easy-going demeanor make it easy to collaborate with Austin on everything from new projects to troubleshooting existing problems.

While earning his Bachelor’s Degree in Informatics from Trine University, Austin supplemented his classroom work with hands-on professional experience during two separate software development internships where he continued to hone his technical skills. Outside of class, Austin was involved with the humane society, performed charitable work through his fraternity, and directed theater performances.

Austin spends his free time on an interesting variety of personal interests. Besides developing computer applications and games, he loves rebuilding and racing dirt bikes, playing bass guitar, singing, and well….pretty much any type of performing on stage. In fact, you may even run into him at open mic night anywhere in the city testing out his stand-up comedy material.